Rise of the Alliance

Looking over my site, I realized that I don't have a comprehensive discussion of the Man of Destiny series.  I have updates on its composition, publication announcements, but nothing to give an interested reader detailed information on why this would be a worthwhile read for them.  This post is intended to remedy that.

Like many people of a certain age, I was excited when I learned that George Lucas was going to finally tell the backstory of the original Star Wars trilogy.  I had been a huge fan back in the day, though by my 20s I'd gotten rid of most of the toys and apparel.  I enjoyed Episode I, but didn't feel it had measured up to the older films.  As the rest of the prequel trilogy came out, my disappointment deepened.  Episode III was something of a breaking point.  I hated that film and the only time I've seen it was the midnight premiere all those years ago.
As the years passed, I lamented all of the wasted creative opportunities the prequels had presented.  The core of the story has such tremendous possibilities of showing how a decadent Republic could fall into civil war and then become the Empire.  I felt that the key to the whole story was Senator Palpatine, whose rise to power would be fascinating to watch, but of course George Lucas had other ideas.  I'd sometimes outline my ideas at social gatherings and one day my wife suggested that I write it all down because she thought it sounded interesting.
I told her I didn't have any interest in fan fiction, and if I was going to write something that lengthy, I'd want to at least have a chance of selling it.  At the time of that discussion, Fifty Shades of Gray was a surprise best-seller, and my wife explained to me that it started out as Twilight fan fiction.  The author circulated it online and after getting positive feedback, she re-wrote it in a new setting while retaining the core story.  Why didn't I just do the same?
So that's what I did.  Over the course of a weekend in December, I sat down and cranked out a 20,000-word novella - the heart of the first book, A Man of Destiny.
Over the next couple of years the story took on a life of its own, which was only to be expected.  I've spent most of my life in or around politics and by that point had more than a decade of military service.    The Man of Destiny series was a place for me to share and explore what I had learned.  By the time I reached the end of Fall of the Commonwealth, it was clear that a trilogy did not complete my story, and thus The Imperial Rebellion came into being.
People who have read the books have told me I've "fixed" Star Wars, but I think the story goes beyond that.
Once you flesh out the various characters - not just Maxim Darius, Adam Flyte and Cristen Morra, but ones who have no clear parallel to the Star War films - the story has to move in a different direction.
The Man of Destiny series therefore stands on its own.  It can still be read as a rebuttal to the creative bankruptcy of the Star Wars franchise but I think it should be taken on its own terms.
After all, Star Wars borrowed heavily from The Hidden Fortress and 1930s serials like Flash Gordon and Buck Rogers.
These books are available exclusively on Amazon.  Here are the links to purchase them:
A Man of Destiny
Rise of the Alliance
Fall of the Commonwealth
The Imperial Rebellion

Posted at 07:39 PM in A Man of Destiny, Books, Culture, Fall of the Commonwealth, Film, Man of Destiny Series, Rise of the Alliance, The Imperial Rebellion | Permalink | Comments (0)

I try to keep this blog free of politics, but the last few weeks have brought out a series of very alarming parallels between the current situation in America and that in pre-Civil War Spain.

As Stanley G. Payne pointed out in great detail in his Spanish Civil War, by 1935 the Spanish Left reached a point where it believed that no other party should be allowed to govern Spain.  This repudiated the constitution that they themselves had written only recently.

Time and again, they broke laws, ignored customs and always chose to escalate rather than calm.  Payne goes through an entire checklist of "off ramps" the Left ignored, any one of which could have avoided the resulting carnage of war.

The fact of the matter is that it is difficult to push a war on people who don't want one.  The Man of Destiny series was written in calmer times, but I recognized that one of the fatal flaws in the Star Wars prequels was how arbitrary and random the start of the Clone War was.

Thus when I began telling my story, I spent all of the first book and half of the second chronicling the downward spiral, including opportunities for both sides to de-escalate.

All historical parallels are inexact and one can rightly note that the standard of living, technology, international reach of modern American cannot be compared with that of Spain in 1936.

Still, I cannot deny that part of the frenzy that drove me to write Long Live Death was a desire to get out in front of events and supply the book as a cautionary tale.  Spain's leaders in 1936 did not have many examples of how a seemingly united and peaceful society can disintegrate into conflict.  We do, with not just Spain but the breakdown of Yugoslavia serving as grim reminders that the bonds that keep nations together can collapse with frightful speed.

I will conclude by asking those of a religious bent to include a plea for reconciliation, forgiveness and renewed unity in your prayers.  We need all the help we can get.

Another harsh take on Star Wars

I've already written my latest Star Wars anti-review, but over at bleedingfool.com, I go a bit farther and ask the question that leaves me increasingly frustrated:  When will people stop making excuses for these terrible Star Wars movies?

There's a bonus reference to Rise of the Alliance, since the movie's title is so similar.

The series is now complete!

Today The Imperial Rebellion went up on Amazon.  The series is done and available for purchase.

The complete "Man of Destiny" series runs 250,000 words and more than 1,000 printed pages.  I often wondered if I could write a trilogy.

Well, I guess I can't, because I had to add an extra book.

Still, it's pretty cool having it done.  I hope you enjoy reading it as much as I enjoyed writing it.

Posted at 06:02 PM in A Man of Destiny, Books, Fall of the Commonwealth, Man of Destiny Series, Rise of the Alliance, The Imperial Rebellion | Permalink | Comments (0)

The end is near: just got the proofs for Book 4

It will take a me a few days to go over them but it looks like things are right on schedule.

The title is a last-minute change.  I had been using "Destinies Fulfilled" as a working title, but I never really liked it.  This was because Man of Destiny was supposed to be a trilogy.  When I decided to press ahead with a fourth book, I had no idea what to call it.

I think "The Imperial Rebellion" is consistent with the other titles.  The cover is pretty cool, too.

I'm told that the ending is particularly good, but of course I would say that, wouldn't I?

Posted at 07:58 PM in A Man of Destiny, Books, Fall of the Commonwealth, Man of Destiny Series, Rise of the Alliance | Permalink | Comments (0)

A Man of Destiny will be a free download tomorrow

Tomorrow, A Man of Destiny will be free to download on Amazon.  This is a great (and risk-free) chance to get into the series.

Rise of the Alliance went live last week and I hope to have the third book up by the end of June.  I just got the edits back on Book Four, and if things work out, it will be published in July.

If you grab the download, please leave a review or a comment here.  The feedback I've gotten back from my proofreaders has been very good, but I'd like to know what other folks think.

If you don't - keep it to yourself, okay?

Yesterday my books were featured in the Ace of Spades HQ book thread.  The Moron Horde (that's what they call their readers) were also the first people to know that A Man of Destiny will be available for FREE DOWNLOAD starting this Thursday.

I'm indebted to the book thread curator OregonMuse for managing to fit my stuff in.

In other news, Rise of the Alliance will shortly be available in paperback.

Rise of the Alliance is now available

Rise of the Alliance is now available for your (digital) reading pleasure: 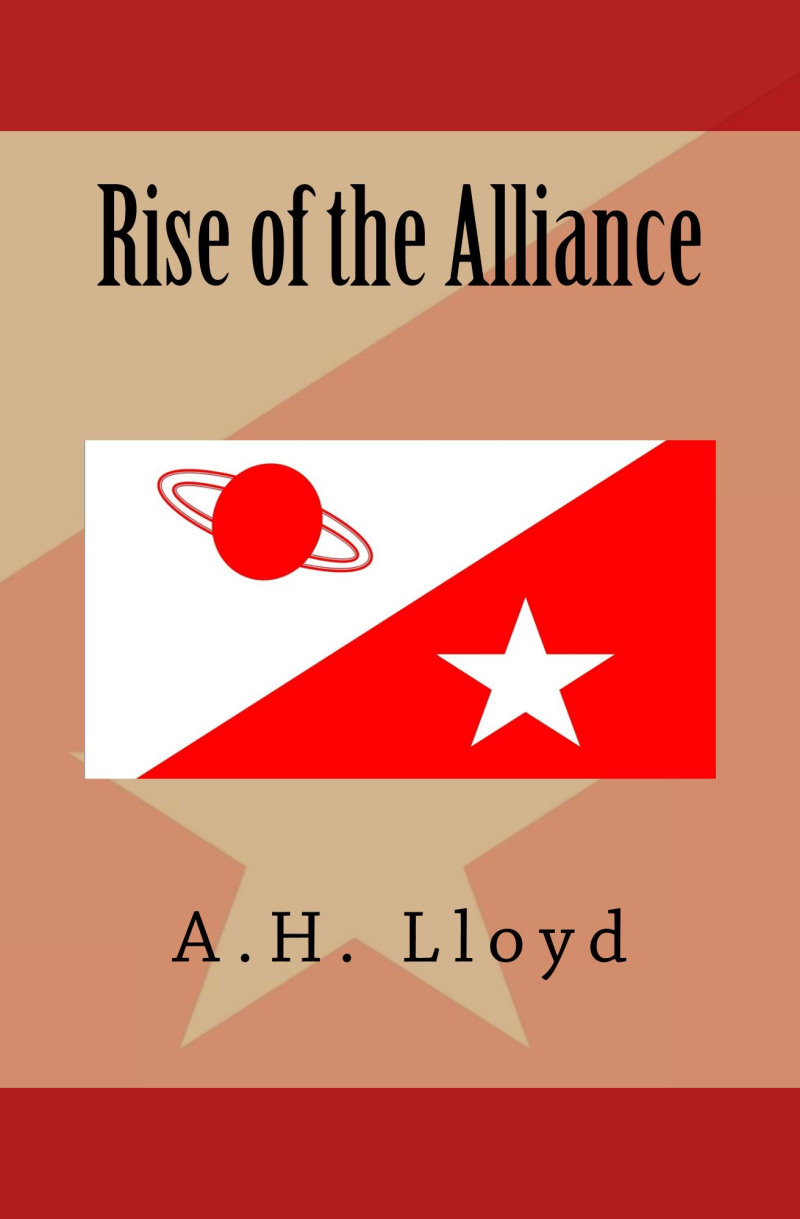 The paperback copy will be a few weeks as I have to review the proofs.

I suppose if I was totally squared away, I'd hold the digital version until the paperback was ready, but so far my hard copy sales have been negligible.

Anyhow, take a look, download a copy and let me know what you think!